The following is a guest post by long-time reader and fellow former-Christian Scientist Dr. Spock. For more, please visit the Guest Posts & Contributors tab at the top of the page.

I frequently visit Victoria, British Columbia, a place that stirs a lot of memories for me, and I recently got back from a week there with family and friends. I partially grew up there, as I often spent my summers as a kid in the area with my cousins, and it was tradition at Christmas to go to my aunt and uncle’s place for a large family Christmas gathering, where I learned fast, as the youngest able-bodied cousin, to eat quickly if I wanted seconds on turkey and stuffing. I always remember the corner store where, when I was around nine or ten years old, my cousin and I spent our allowance one hot summer day on a box each of about a dozen Twinkies, on which we gorged ourselves while sitting on the store’s stoop. Before we were able to pedal all the way back home, we were throwing up in a ditch by the side of the road. The store isn’t there anymore, long ago swallowed up by condos and cookie-cutter yuppieish boutiques and coffee shops as urban development spread into the once semi-rural area where my cousins lived. Sometimes I drive by the house my cousins lived in, and try to find some of the other landmarks from my childhood summers as they occasionally emerge from the mists of my memory. Along with the fun memories of childhood, also come some darker ones. Victoria is also the place where my mother went to die in the worst pain I can imagine, in a Christian Science nursing facility. It is also where my father and I scattered her ashes at the seashore; and where, less than a year later, I scattered his. These memories burn brightly as if it were yesterday when it all happened.

Victoria is a beautiful city, and I always enjoy my visits with family and friends in the area. On the other side of the coin, it’s not always easy to be there. One ritual I always perform when I’m there is to visit the seaside park where my parents’ ashes were scattered. It’s the one place where I can physically go and “visit” them. It’s a spectacularly beautiful spot with a view over Juan de Fuca Strait towards Washington State in the USA. Dad and I chose that spot to scatter Mom’s ashes because of its beauty, and the fact that it combined, as best as possible, two places she loved: Vancouver Island (where Victoria is located), and in view of Washington State. After we scattered Mom’s ashes, Dad declared to me his desire to have his ashes scattered there as well, saying that when the time came, he “wanted to be with her”. Previously, for many years, he’d expressed a desire to have his ashes scattered in the Canadian Rockies.

Not far from where my parents’ ashes were scattered, is the place I consider to be a true House Of Horrors a.k.a. Wayside House. It’s the Christian Science nursing facility where many good Canadian (and maybe a few American and other) Christian Scientists go to suffer and often die–without even the most basic pain mitigation allowed to soften the blow. Wayside House is where my Mom died under Christian Science “care”. I’ve often driven past this place over the years, usually never stopping; trying not to give the place much more than a second thought, but this time, it was different. I drove around the block to circle back in front of the driveway into this despicable place. I pulled over to the side of the road and just sat there and looked on for a few minutes. It looked peaceful and serene at the House Of Horrors. In fact, it looked like nobody was there at all, but I knew otherwise. Beneath that serene exterior, I knew there were people in there in excruciating pain, dying of god only knows what awful diseases they chose not to have treated or even diagnosed.

I remember a visit to the House Of Horrors early in childhood when my grandmother worked there as a Christian Science nurse. I distinctly remember hearing a woman moaning in pain or some sort of discomfort from a room down the hall as I accompanied my grandmother on her rounds. I don’t remember if I asked Gram about what I heard, but I do remember it. I wonder now what sort of pain that poor woman was in. The only comfort the “nurses” would’ve been able to offer would have been to shift pillows, offer water or juice, or read from the Bible and/or the writings of Mary Baker Eddy or other Christian Science literature. Not even an aspirin is permitted in these houses of horrors, and people often enter these facilities with advanced cancer or other serious diseases eating away at their bodies. Before Christian Scientists will acquiece even to care at a Christian Science nursing facility, they will often have suffered at home on their own with whatever ailment they’re dealing with for quite some time. Any admission of advancement of a disease is an admission of failure in your practice Christian Science, and many Christian Scientists are loathe to admit such.

Thankfully, the House Of Horrors is on its last few remaining financial legs, as far as I know. Each year it manages to remain in operation amazes me. Unlike Christian Science nursing facilities in the United States, this facility receives no government funding for patient care, although it is licensed as a “private hospital” under the laws of the province of British Columbia. Canadian Medicare, unlike Medicare/Medicaid in the United States, wisely does not fund care in non-medical facilities, and I don’t know of any private insurance here that does either. If you go to this place, you’re there on your own dime and for what you get, it’s not cheap. Some financial aid is apparently available. As I settled out my parents’ estate, I begrudgingly wrote a cheque for over $1,000.00 to settle up the last payment for Mom’s so-called “care”. For her hard-earned cash, Mom got a room, a nicely made bed each morning, and nicely prepared food, which the large tumour growing in her abdomen pretty much prohibited her from eating. Her pillows were probably fluffed and shifted as needed, and she had a phone for her use. Other than that, the nurses would have only read from “the books” (the Bible and Science and Health with Key to the Scriptures), some other writings by Mary Baker Eddy, and maybe some Christian Science periodicals. Apparently, one nurse was a good piano player and sung hymns with her in the common room. They also filled Dad and I up with sunny reports of Mom’s “progress”, including one story of her “dancing” in the hallway (I’ve heard different versions of that anecdote from others, so I wonder if it’s part of some script that Christian Science nurses learn in their training). I later learned from my non-Christian Scientist cousin, who visited Mom frequently at the House of Horros, that the only progress Mom was making in her last weeks there was towards the grave, and that she appeared to be in excruciating pain most of the time. The sunshiny, rose-petaled denial that Christian Scientists retreat to in the face of serious illness is deeply maddening to me now.

The House Of Horrors survives largely on bequests, donations, and in the past by sales of its formerly extensive real estate holdings. It’s located in a high-value neighbourhood of Victoria, and once comprised several acres of open space. I’d estimate the property they sold off was probably worth a few million dollars over the years. I’m not certain how much of their endowment still exists, but several years back I remember overhearing a conversation my uncle-in-law was having (he was on their board of directors at the time), and it sounded like the money was getting thin. Like the Christian Science Church and other Christian Science affiliated organizations, the House Of Horrors is a dying corpse that survives by cannibalizing itself by selling off assets, and benefiting from the bequests of dead Christian Scientists. Fortunately, no Christian Science-related organization got any bequests from my parents’ estate–they left it all to me exclusively, and there’s no way in hell will I give one dime to a Christian Science-affiliated organization. However, if I had pre-deceased my parents, a branch church, The Mother Church, and Principia would have equally split the proceeds from their estate. It’s a good thing I’m a survivor, I guess. I’d hate to think of any of my parents’ estate helping to sustain anything connected with Christian Science, despite their own [misguided] dedication to it, especially as I think on the horrific ways their dedication to Christian Science ended up killing them. Each year, I make a gift to the Salvation Army during their Christmas Drive in quiet honour of my Dad who did the same during his lifetime.

I sat there in my car looking on at the House Of Horrors, and raised my middle finger in a quiet salute to this awful place. Through my open window, I said “fuck you!” It felt good as I drove away. Nobody, except maybe the neighbour in whose driveway I’d stopped, would have heard me, but it still felt good. I said my peace to that place. I told them what I thought of them and what they do there. It was also my “fuck you” to Christian Science. Sometimes, you just need to do things like this. 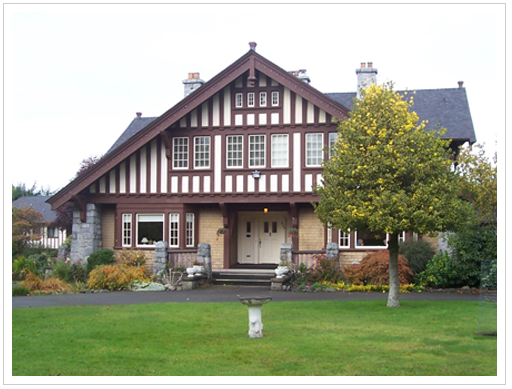 4 thoughts on “House of Horrors”