This is one of several posts exploring the accusations of plagiarism leveled against Ms. Eddy, as well as what may have influenced the writing of Science & Health. This, and future posts dealing with this topic will be tagged MBEPlagerism.

This post also contains some affiliate links, thank you for supporting Kindism.org

Some time ago, I made a note for myself: WHO IS SWENDENBORG?! in the margins of my little black book. Why? The more I read about Ms. Eddy and her sources of inspiration, the more the name Emanuel Swedenborg keeps popping up. Dakin refers to Swendenborg in Mrs. Eddy. The biography of a virginal mind, Haushalter refers to him in Mrs. Eddy Purloins from Hegel

,
he is mentioned in an interview with the Rev. Wiggian, and each time I am left with the feeling that I should know who Emanuel Swendenborg is. 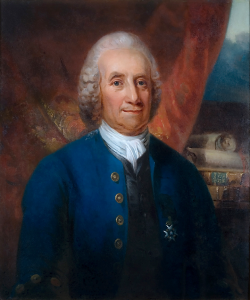 With such an impressive list, it seems likely that Swendenborg was in the public conscious during Ms. Eddy’s time, and that the contemporary sources I found would be aware of Swendenborg’s work, as would have their educated middle class audience — Christian Science’s primary demographic.

In my search for information about Ms. Eddy and Swendenborg, I came across an article by Henry M. Craig, M.D. in The New York Times dated August 18, 1907 (2). In addition to offering an interesting analysis of their respective works, it also offers a side-by-side comparison of Swendenborg/Eddy. 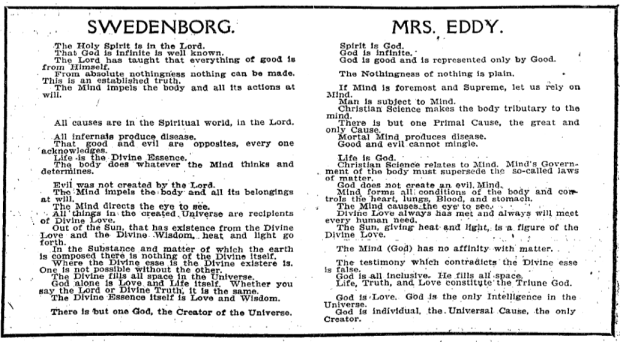 John Whitehead addresses the Swendenborg/Eddy situation in his book 1907 book The illusions of Christian science, its philosophy rationally examined (3). For brevity, and because I don’t want to slog through 247 pages of esoteric theological and philosophical discussions, I shall focus on the appendix which directly addresses Swendenborg and mental healers. In the appendix, starting on page 222, Whitehead addresses Craig’s assertions that Ms. Eddy borrowed from Swendenborg starting Rev. Wiggins perspective on the issue:

Whitehead goes on to provide an interesting analysis of Ms. Eddy’s sourcing techniques and comes to a similar conclusion as Dakin does with Ms. Eddy’s sourcing from Quimby*: she undoubtedly borrowed from Swendenborg, but her reinterpretation of his work is entirely her own. On p. 223, Whitehead describes Ms. Eddy’s method as “greatly changed in the transmission” and compares her work to a garden where Swendenborg’s idea-flowers have been “transplanted without roots.”

On p. 229, under the section on Medicine, Whitehead provides an interesting analysis of the contrast in teachings:

The contrast of Eddy and Swendenborg’s approach continues, from The Law of Healing (p. 235)

There is no doubt that Ms. Eddy’s contemporaries felt she had sourced from Swendenborg, and the Swendenborg Foundation, a nonprofit organization whose purpose is to help people learn about Emanuel Swedenborg, shares these views, crediting the 17th century scientist with influencing Ms. Eddy as well. From their website, under “Cultural Influence” (4) they discuss

The Swendenborg Foundation is not the only one to note these similarities, the What is happening blog which is “Blogging the beginning of Chicago’s Christian Science fellowship” has a post dated March 27, 2010 entitled What do Mary Baker Eddy and Emanuel Swedenborg have in common? (5) as part of an Interfaith meeting. This is one case where reading comments on the internet is not only okay, I acutally encourage it.

The Fellowship’s post inspired me to research Swedenborgianism, the church founded on the teachings of Swendenborg. From the church’s official website:

Key elements of Swedenborgian belief include:

The parallels with Christian Science are undeniable, however I find myself agreeing more with Whitehead (and Wiggins) analysis of the final product.

* Yes, I know, I need to write a post on Quimby